Drip Stains/Patterns
(caused by the force of gravity only)

The physical evidence in any crime is the only way to know for certain what took place. In any violent crime scene, investigators may obtain a wealth of information from the blood stain patterns.  The patterns reveal major clues and possibly solve crimes.  Unlike the suspects, the blood patterns do not lie.  This article introduces blood stain analysis followed by one of Italy’s top forensic experts opinion – Colonel Luciano Garofano on the blood stains in the Meredith Kercher murder case.

“BPA [Blood Pattern Analysis] provides information not only about what happened, but just as importantly, what could not have happened. This information can assist the investigator in reconstructing the crime, corroborating statements from witnesses, and including or excluding potential perpetrators from the investigation.”

When blood drops or splatters on a surface, the shape can be used to calculate the location of where someone was struck and in what direction. 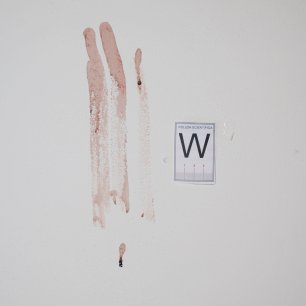 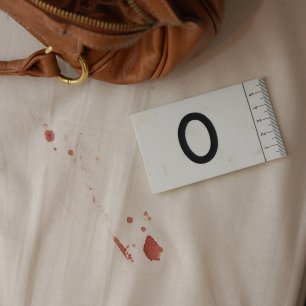 Spatter Patterns (impact, cast-off, etc.) are liquid blood, internally or externally, subjected to a force greater than gravity.  The number, size and shapes of the droplets of blood can be measured to reveal the distance, direction and number of attacks in a given area.

Most of the blood spatter in this case was located on the lower part of Meredith’s wardrobe door showing that she was next to her closet.

Some of the blood on Meredith’s wardrobe door was determined to be “Expirated spatter – [which] is usually caused by blood from an internal injury mixing with air from the lungs being expelled through the nose, mouth or an injury to the airways or lungs. Expirated spatter tends to form a very fine mist due to the pressure exerted by the lungs moving air out of the body. Small air bubbles in the drops of blood are typically found in this type of spatter.”

Some cast off droplets were from a weapon.

Studying the shape and measuring the length and width provides an accurate location of where and what direction the blood originated.  This helps retrace the movements of the victim and perpetrator(s).

This is called the Angle of Impact Determination.

The angle of impact can be mathematically determined based on the elliptical appearance of a spherical blood spatter stain. (Visit their website for mathematical formula)

In this crime scene photo, investigators circled the blood spatter with a more elliptical (“exclamation point”) shape indicating that it was from a different source than the circular (“expirated”) stains.  The smaller the angle, the more oval the shape.  The different shapes of the stains indicate different sources of blood spill providing clues to the sequence of events in the attack.

The ‘exclamation point’ in the crime scene photo is on the bottom of the stain indicating that the source was from up above at approximately 25 degs.  The ‘tail’ of the exclamation stain forms in the opposite side from where the drop fell. 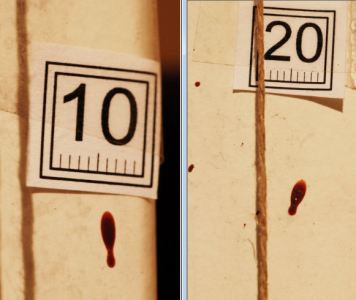 Measuring these marks provides a 3-dimensional model of what happened and where. 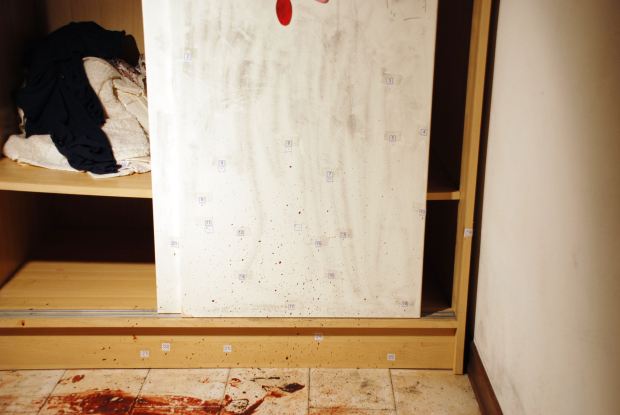 “Blood pattern analysis indicates Ms. Kercher was fatally stabbed around 40 cm [15.7 inches] above the ground, near to the closet door.”

The authors of the book Darkness Descending interviewed a top forensic expert of the elite Carabinieri, Colonel Luciano Garofano, to share his opinion of the Meredith Kercher murder case.  Col. Garofano set up Italy’s first DNA laboratory in Italy and led the Reparti Investigazione Scientifiche.

Pg 381-2: “The indication is the fight was fast.  There aren’t many signs of a fight going on.  The glass is still standing, the postcards on the chest of drawers are still there.  No, there is not much sign of a fight.  So the action moves from near the white desk around the room in anti-clockwise fashion to the area in front of the wardrobe.” 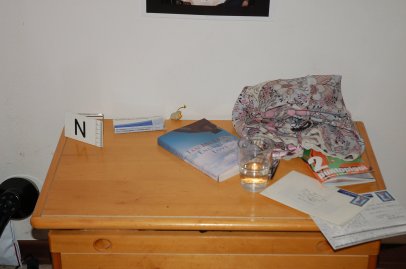 ‘The knifing would have happened near the wardrobe.  The wound was to her left throat, so the bleeding would have gone all over the floor.  There is a lot of blood there but not enough.  The person who struck the knife in got most of it on his or her clothes.  The victim swiveled round and began coughing blood on the wardrobe.  Her head was low so presumable she was kneeling at that point.'”

Colonel Garofano then looked at the photo of the ‘five swipes.’  Pg.382:

If we blow up the picture we can see, however, that they are slightly blurred at the edges.  Blood jets don’t do that.  Blood pumped out of the artery leaves neat marks.

So let’s assume they are fingermarks.  But they are too strong to  be fingermarks of someone dying . . . her [Meredith’s] hand would have had to be upside down here.  She would have to have been on her knees on the left of the wardrobe, which we know she wasn’t because of the blood droplets on the side of the wardrobe that show she was on her back at that point.

And a dying person wouldn’t have had the strength to make those marks.”

” . . .you see the mass of blood is inside and the movement is outwards and then there’s the scrape mark along the edge of the wardrobe.  No, it’s a hand.  It has to be a right hand. Look at the space between the fingermarks.  There’s a centimeter marker just above it.  They are 2 and a half centimeters apart, even 3.  So it’s a big right hand’.  .  .  This is a man with bloody fingers using the wardrobe as a lever, his right hand pushing against the inside of the wardrobe, maybe as an anchor to some other effort he is making.'”

[Note: Rudy Guede claimed that he tried to help Meredith by putting towels on her wounds.  So this hand could be from attacking her, moving her, or helping her possibly.]

He then discusses the larger clots of blood on the floor by the wardrobe: 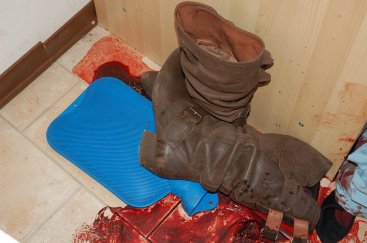 The large clots of blood show that she was in that location long enough for large amounts of blood to pool.  According to Colonel Garofano, this would not take long with her wounds, only tens of seconds.

From .SIAK Journal for Police Science and Practice: “Large pools of blood, for example on solid surfaces, lead to serum separation. This means that the blood corpuscles sink because of their weight and the serum remains on the surface as a transparent liquid. Those unfamiliar with this phenomenon might think that liquid has been added to the blood. In reality, however, this is a non-manipulated blood pool, in which the blood was standing.” 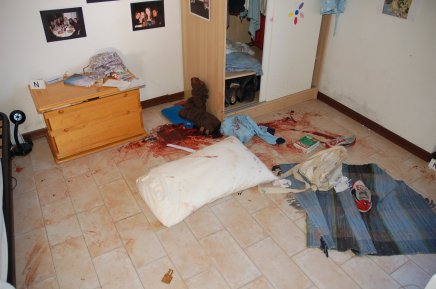 “While she is bleeding, so still alive, she is flipped over and moved to a supine position where her wound continues to bleed into the corner between the wall and the wardrobe. . . She is still coughing little droplets of blood. ”

Col. Garofano continues to describe how the oxygenated blood pattern on the wardrobe door indicates that Meredith was alive and coughing after she was turned over -face up.  Her head was against the wardrobe doors. The autopsy report also confirms this as there were droplets of blood on her chest.

Pg 385 “What I am looking for here is the big blood spurt from the wound as the knife comes out, and it just isn’t there.  It must be on the clothes of the person who stabbed her.”

He goes on to explain the mixed blood of Amanda Knox and Meredith Kercher are found in footprints in the corridor.  It was not cleaned up because the amount of blood was so faint that it was invisible to the naked eye.  Therefore no sweeping stains of a clean-up in the corridor.  However, a bare footprint in Meredith’s blood on the bathmat in the smaller bathroom matches Raffaele Sollecito’s foot and does not have any prints leading up to it showing a clean-up there.

In the bathroom, there is a copious amount of blood loss by Amanda Knox on the faucet tap, along with mixed blood with Meredith Kercher in the sink, bidet and on the cotton bud (Q-tip) box.  Amanda Knox’s blood was was fresh and untouched on the faucet so she was bleeding that night.  Pg 373: “Not from a pierced ear, nor from washed underwear, but from bleeding. A bleeding nose maybe, a cut or two cuts because we have to consider the blood stains in the corridor.”

Another facet of the transfer blood stain analysis showed that Amanda Knox and Raffaele Sollecito left their footprints in bare feet while Rudy Guede was wearing his shoes.

Pg 378: “There are so many things in the flat that separate the three into the Knox/Sollecito group and Guede. Guede goes to the toilet, Guede is dressed, Guede leaves a finger print.  It’s as though Guede was there for longer, but dressed and shod [wearing shoes – Nike Outbreak 2 sneakers],while Amanda and Raffaele are there more briefly but barefoot.  There is no Guede in the small bathroom, for example.  All this tells me they were not acting together at the time of the murder itself.”

Other transfer stains that Col. Garofano points out on pg. 384 “There are three parallel marks on the floor just north of the white bag. [K tag]  They look like shoe stains. Pointing towards the wall.  The blood drops on them are full, so the marks were made before the blood drops fell on them, and if we presume the blood drops come from the knife then those marks, maybe show marks, could belong to the killer.” (Below pic)

Pg 384: ” . . you can see blood drops under the desk  . . .[and] Those shoe stains look like they are coming form the same foot stepping sideways.   The knife’s out and moving around, dropping blood under the desk.” (Below pic)

Returning to the big blood stain in front of the wardrobe, Pg 381: “There is a small cleanish square shape that was protected from the blood, and that might be where the Collins Dictionary was at first, and that was moved afterwards.  What is a pocket dictionary doing on the floor? Where might it have been before?  There – under the desk the chair’s leg is resting on a Corriere della Sera newspaper, which has been torn.  The dictionary would have been there and kicked towards the wardrobe during the fight.” 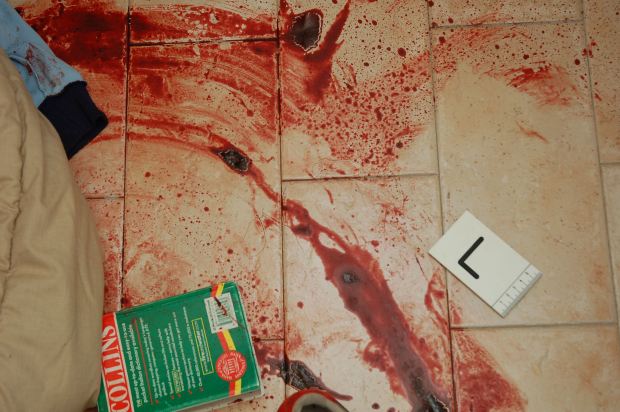 There is much more of Col. Garofano’s analysis which can be read in the book Darkness Descending.   Visit themurderofmeredithkercher.com for a full list of blood and other evidence.