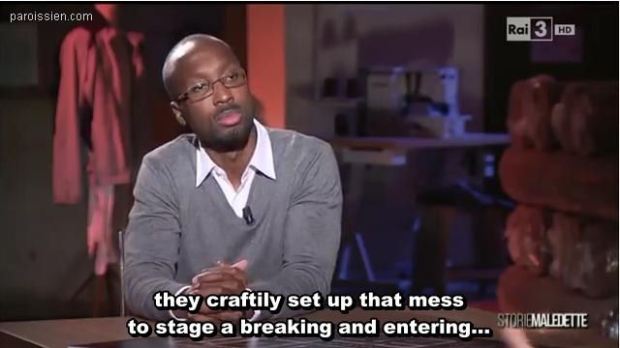 It is being reported in Italian news that the Ivorian embassy paid a visit to Amanda Knox co-defendant Rudy Guede.  Guede was born in the Ivory Coast before being brought to Italy at the age of five by his father and growing up Italian.  He described all of this in his January 21, 2016 interview with Franca Leosini on television show Storie Maledette.

In that interview, Guede reconfirmed that Amanda Knox and Raffaele Sollecito were there at the murder scene where Meredith Kercher was tortured and killed.  Knox and Sollecito were acquitted in 2015 due to lack of evidence leaving Guede the only suspect still in custody.   Guede was convicted in 2009 of being an accomplice to murder but not the one who killed Meredith.  Amanda Knox was believed to be the one who stabbed Meredith Kercher to death since  a knife with Knox and Meredith Kercher’s DNA was found in Raffaele Sollecito’s apartment.  This has led Guede to ask the courts to reopen his legal case.

A “delegation, composed of the First Counselor and Embassy Legal Adviser of the Ivory Coast in Italy, Michele Ahmed and Antonio Karaboue, spoke for more than an hour with Guede in jail . . ”   The last time Guede was visited by the Ivory Coast embassy was during his trial in 2009.   Guede reaffirmed his innocence with the delegates and discussed his future plans, including reopening his case.  A team of volunteer lawyers and researchers from the Centre for Criminological Studies of Viterbo are also helping Guede.  In addition to this, Rudy Guede’s press office announced that they are working on a “ . . . publishing project and an online store. . . ”  Guede’s press office is also updating his Facebook page regularly, with recent news.