Amanda Knox sues Italy ‘Look what you’ve done to me’

It is being reported on May 17, 2016 that an appeal filed by Amanda Knox with the European Court of Human Rights has been accepted.  “In the appeal, Knox says she was subjected to an unfair trial and was maltreated during questioning.”   In addition, Knox says her rights to privacy and family life were denied by the Italian government.  Amanda Knox and Raffaele Sollecito were acquitted by the Italian Supreme Court for the murder of Meredith Kercher in 2015, however Knox’s conviction for slander was upheld.  Knox  falsely accused her boss, Patrick Lumumba, for the murder three separate times.  Knox simultaneously incriminated herself stating that she was at the crime scene with Lumumba.  Knox never recanted her accusation against Lumumba and he was given an alibi and released two weeks later.

The ECHR is still in its preliminary stages, only asking for information from the Italian government now.  No matter what ensues, the ECHR does not have the authority to overturn a final judgement by the Italian courts.  Therefore Knox’s conviction for slander is permanently on her record.  However, the ECHR could make demands for the Italian government to compensate Knox, if they deem fault by the Italian judicial system.  Knox has already become a millionaire from Meredith Kercher’s murder through a book deal, interviews, and donations.

Knox’s appeal is not a top priority for the ECHR which normally handles international cases of torture, forced labor, and other human rights violations.  The ECHR gave Knox’s appeal a low priority level of three:  “3=Low importance: Judgments, decisions and advisory opinions of little legal interest, namely judgments and decisions that simply apply existing case-law, friendly settlements and strike outs (unless raising a particular point of interest.)”  Consequently, Knox’s appeal could end up being thrown out by the ECHR in the near future.

Knox and her public relations firm have stretched the truth regarding the circumstances surrounding the murder of Meredith Kercher ever since Curt Knox hired them in 2007. Knox recently stated that she was questioned a total of 53 hours in the four days leading up to her arrest.  However, trial watchers proved with court documents and her own cell phone records that 53 hours was a grossly inflated number.  Realistically Knox and everyone else who knew Meredith Kercher were interviewed for a number of hours amounting to no more than seventeen hours over four days.

While Knox’s sympathizers are celebrating this new legal maneuver instigated by Knox, Italians may not respond so favorably.  Judging by the reaction last month to Knox’s ex-lover-of-one-week Raffaele Sollecito after he was given a spot on television as a crime expert, this appeal may fan the flames against Knox.  A woman from Livorno, Italy started a Change.org petition, asking the television station to remove Sollecito as a crime show commentator.  Her petition instantly went viral amassing almost 24,000 signatures within a fortnight of being published.

Along with the bad taste that Knox and Sollecito’s trials have left on Italians palates is the rising anti-European Union sentiment which pervades the country.  In a recent poll, almost half of Italians want to leave the EU.  This may result in the Italian taxpayers outrage at Knox’s ECHR appeal and subsequent request for compensation to add to the the millions that she has already received from this crime.

The European Court of Human Rights requires that applicants meet a list of criteria before their case can be accepted.  According to a legal expert, Knox’s claim has not met the necessary guidelines to be considered before the ECHR:

“1. The applicant: has she exhausted the domestic remedies available to him to complain about the violation of Article 3 of the Convention, concerning the steps (scappellotti) allegedly suffered, and Articles 6 §§ 1 and 3 a), c) and e) and 8 of the Convention?

No. In fact, the applicant did not even initiate the process to seek a remedy through Italian law. The point is particularly relevant not only because of the obvious status of inadmissibility of the application before the ECHR (no domestic remedy was attempted), but also as for its probative value as for assessing the credibility of the version of facts provided by the applicant.

This is because of the following legal provisions under Italian law:

a) the crimes of beating (cp 581), or physical violence or threat (cp. 610-612) require the victim to file a complaint in order to allow prosecution of the charge, otherwise investigation cannot initiate;

b) the Ethics Code of lawyers requires a defence attorney to file a charge if he/she collects a claim by a client under detention, and to properly inform the client about the necessity to file a complaint;

c) if a lawyer is informed by a client under detention that the same client suffered a violence or offence by authorities, and does not take proper legal steps, the lawyer would commit an extremely serious criminal offence called “infedele patrocinio” (betrayal of the interest of client) besides breaching the Ethics Code;

d) a defence attorney is also required to object any irregularity of breach of the code that could be suffered by the client, namely, in the particular case, if the applicants current claims had been made at the tiem, the lawyers should have denounced the breach of Procedure Code claiming that a prosecution interrogation had taken place (thus, that would mean breaching the Procedure code that prevents prosecution from questioning a suspect prior to his/her appearence before a judge), but the defence attorney never raised such claim.

Therefore, the failure to initiate procedure for domestic remedy by the applicant on this claim, not only causes the request to be inadmissible on this point, but also undermines any possible credibility of the claim itself.

a) Does the applicant have been submitted, in breach of Article 3 of the Convention, inhuman or degrading treatment? It is impossible to know for certain whether she received a slap at the back of her head, while it is impossible to prove it. There is actually no element of evidence in support of that besides the applicant’s writing, while there are elements tat indicate the opposite, that is: the defences’ failure to make the necessary step for complain and initiate a process to investigate the claim; the testimony of interpreter Anna Donnino who was present at the police interrogation, a reliable witness who denies any mistreatment ever took place in her presence.

b) The applicant she has, as required by Article 6 § 3 a) of the Convention, was informed in promptly, in a language they understand and in detail, of the nature and cause of the charge against him for false accusation? Yes, the charge for false accusation anyway was issued much later. She was not a suspect for that crime at the time of the interrogation nor in the following days.

c) Does the applicant have had the assistance of counsel of his choice, as required by Article 6 § 3 c) of the Convention, especially during interrogation of 6 November 2007? No interrogation took place on 6 November 2007 (except the police questioning that ended at 01.45 am). Had interrogation taken place later that day, it would have been illegal. Knox’s defence should have rised a complaint to the court immediately if that happened. They never raised such claim.

d) Has the applicant obtained the free assistance of an interpreter, within the meaning of Article 6 § 3

e) of the Convention? Yes, she had an interpreter, but the applicant was not suspected of that charge at the time, and was not undergoing an interrogation, but only a police questioning which is inadmissible as testimony in court, therefore she was not in the condition of being entitled to have an interpreter in the meaning of Art. 6 of the Convention (which refers to papers usable in a court).

e) The psychological pressure allegedly suffered by the applicant during interrogations of 6 November 2007, she has violated the right of the latter to a fair trial within the meaning of Article 6 § 1 of the Convention, and the right to respect for private life protected by Article 8 § 1 of the Convention? The applicant later in court she claimed of having suffered of a False Memory Syndrome. It needs to be pointed out that there was only one interrogation reported in trial papers, that lasted overall a time between 22.30 and 01.45, that is three hours. The final judgements of Cassazione deposited in 2013 and 2015 point out that the calunnia committed by the applicant was a prolonged behaviour, that she committed on multiple occasions, and that the statement she released on Nov. 6 recorded on paper by a prosecutor at the presence of an interpreter, was a spontaneous statement, not an interrogation (and as said, the applicant’s defence position was to not claim there was any prosecution’s interrogation).”

Timeline of events leading up to Meredith Kercher’s murder: 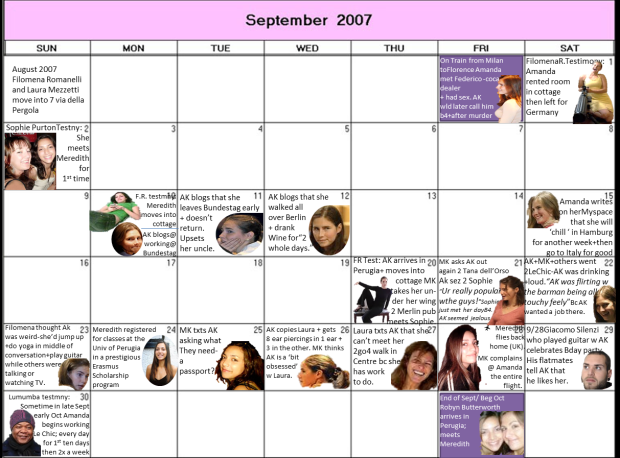 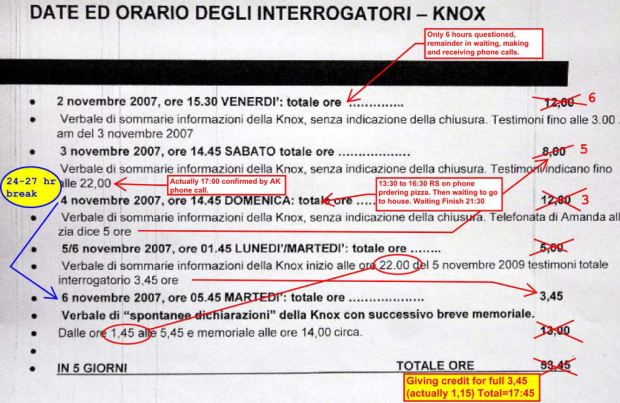