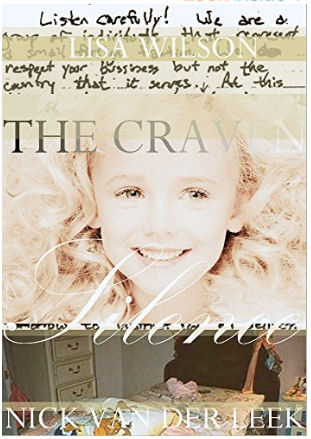 “Do innocent people hire armies of lawyers and PR people at the drop of a hat?”

Investigative journalists Nick van der Leek and Lisa Wilson hold their magnifying glass over one of the most controversial murder cases in America -the 1996 murder of Jonbenet Ramsey.  It has been 20 years since the six-year-old’s lifeless body was discovered in the basement of her home.  Van der Leek and Wilson have studied many difficult-to-solve cases and by carefully reconstructing the sequence of events surrounding the crime, with an open but curious mind, they reveal more food for thought into how and why this case unfolded as it did.

The book begins in the morning that former beauty queen Patsy Ramsey called 911 followed by the infamous ransom note.  Much has been written about the latter but the two astute writers focus not merely on the contents of the ransom note but how John and Patsy Ramsey found and reacted to it.  Taking a different angle, that other crime writers generally skip over, is where these two authors ferret out the facts.  From the start, the reader is asked to wonder if the parents stories and actions seem suspicious, spoiler alert – yes!

An analysis and more questions to ponder over the peculiar content of the ransom note left by a ‘foreign faction,’ is also covered in detail which includes experts’ opinions.  Segments of interviews with authorities on the case as well as the family members is also included and sheds more light into the mindset and motivations of the people who were closest to the crime.

The gruesome details of Jonbenet’s injuries and how she was found is also explored for clues to who, what, where, and why this precious child was brutally taken from this earth. The book also take a closer look at Jonbenet’s brother, Burke, who recently gave an interview on TV by Dr. Phil.   An intriguing look into Burke’s statements and behavior, then and now, provides more information than ever before.  No one and nothing is left unscrutinized, not even the police investigators or the town where the homicide occurred.

Also fascinating is how the authors divulge the public relations (PR) campaign initiated and played out by the Ramseys almost immediately after their daughter was killed.  The same types of PR games are played out in most prominent murder cases and are indeed why these murder cases become international news stories to begin with.

In summary, this book is a must read for anyone interested in the Jonbenet murder case as no other crime writing team delves into the nooks and crannies as carefully or as skillfully as van der Leek and Wilson.  They cite numerous interviews, documents and expert opinions providing the reader with a comprehensive yet easy-to-follow narrative of events surrounding the death of Jonbenet Ramsey.