It looks like Amanda Knox’s co-defendant, Rudy Guede, is getting an early Christmas present

Rudy Guede was the third person accused of murdering Meredith Kercher along with Amanda Knox and Raffaele Sollecito in 2007.  Guede’s lawyer at the time, decided to hold his trial separately since he was the only black man and his lawyer knew that Knox and Sollecito’s defense team would try to pin everything on him.

Guede was found guilty in 2008 while Knox and Sollecito were found guilty in 2009.  Rudy was sentenced to 30 years which was reduced to a 16 year sentence since he was only considered an accomplice to the crime.  The courts did not believe that Rudy acted alone, but that he was there.  This was reiterated by the Italian Supreme court’s final report after they acquitted Knox and Sollecito in 2015.

The Italian Supreme court also concluded in 2015 that Amanda Knox was there too, and that she washed Meredith’s blood off her hands.  This was due to Knox’s DNA being mixed with Meredith’s blood in their shared bathroom. 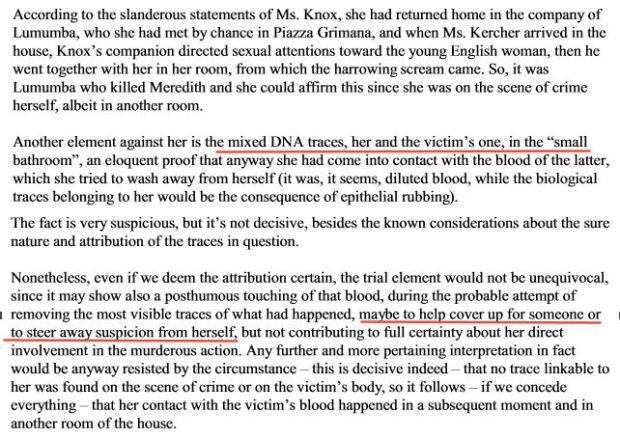 Amanda Know was well acquainted with Rudy Guede and she even smoked hashish with him and the other young men who lived in the apartment below. Rudy even asked one of the guys if Amanda was dating someone and they said, “no.”  (This was because Amanda hadn’t met Raffaele Sollecito yet.)  Rudy was very attracted to Amanda.

Rudy had the hots for Amanda while she was lusting over Meredith Kercher’s boyfriend, Giacomo.  However, after the trial, Amanda Knox desperately tried to distance herself from her co-defendant Rudy Guede.  In a recent podcast, Amanda even refused to say his name, only calling him a “local burglar.”  However this was a lie as Rudy Guede did not have any criminal record at all before the murder.

In fact, Rudy had been raised by one of the wealthiest families in Perugia.  Rudy lived in an apartment which was near Amanda’s friend, Raffaele.  Rudy often played basketball with the young men who resided in the same cottage as Amanda.  Rudy has said repeatedly that it was Amanda Knox who murdered Meredith Kercher.  As recently as January 2016, Rudy Guede gave an interview which was viewed all over Italy where he said that Amanda and Raffaele did it. 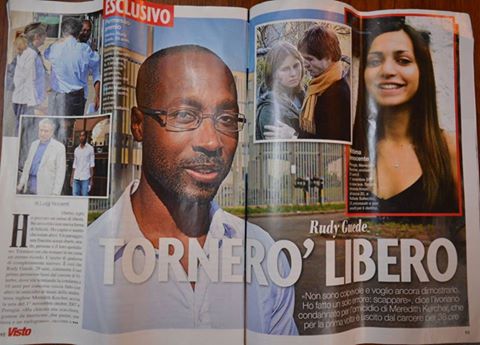 Amanda lied again in a podcast interview by claiming that the supreme court found her “definitively innocent.”  No, they did not.  In fact, they went out of their way to say that although they acquitted, it was only due to questions about evidence.

. . .the court had found Knox and Sollecito not guilty due to insufficient evidence. (Art. 530.2 of the Italian penal code). This contradicts Knox’s statement she had been found innocent, which would be a finding under Art. 530.1.

After the murder, Rudy fled to Germany.  This was a seemingly odd choice for him since he didn’t know anyone in Germany and didn’t speak the language.  Amanda Knox had family there and it was speculated by some that Amanda and Rudy may have had an arrangement to meet there after things cooled down following the murder.

Amanda went on to accuse another black man of stabbing Meredith Kercher, her boss Patrick Lumumba.  Many think she did that in order to cover for Rudy. 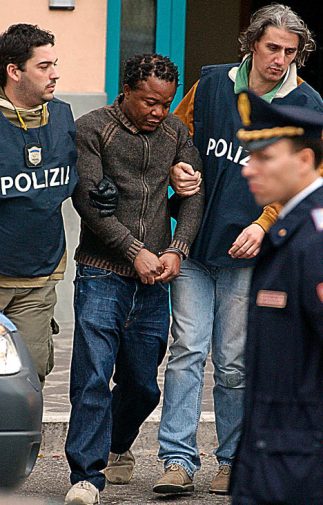 Amanda let her boss Patrick Lumumba sit in jail for 2 weeks, she never recanted her accusation

Amanda’s boss Patrick Lumumba owned a bar named Le Chic, he lost his business due to Amanda’s accusation of murder

In 2015, Amanda and Raffaele were granted a controversial acquittal while Rudy remained in prison based on the exact same evidence.  As a result, Rudy’s  new legal team have requested a retrial which will be decided upon this Tuesday, December 20th and it looks like Rudy will be getting it. 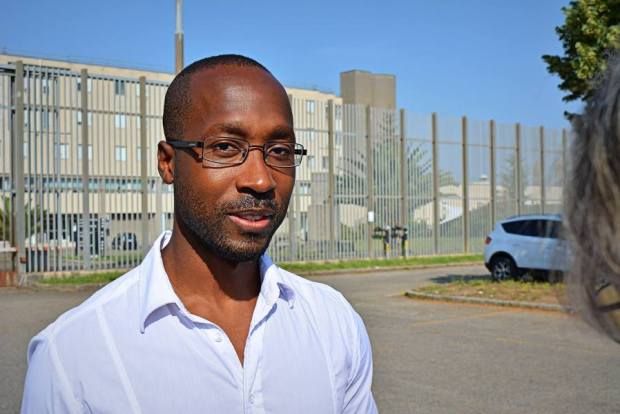 This will open up the murder case all over again as it will shine a light back onto Amanda Knox and Raffaele Sollecito and the legitimacy of their controversial acquittal.