UPDATE 5-July-17: Woman has been identified as  47-year-old Teresa A. Poehlman by family members. 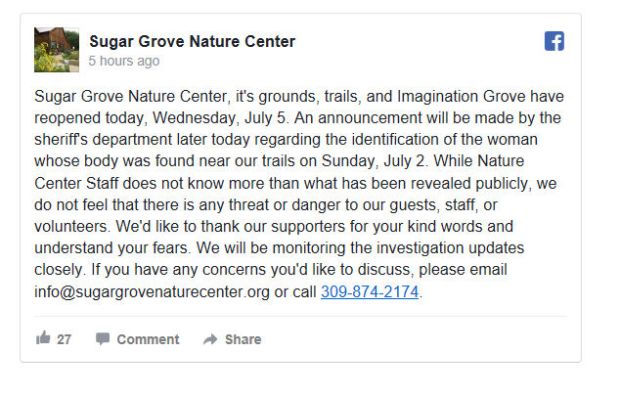 It is being reported by McLean Sheriff’s office that a woman’s body was found on July 3, 2017 in Funk’s Grove, IL.  Authorities are asking for the public’s help to identify her.  The woman was discovered as the police were searching for missing Univ of IL student, Yingying Zhang.  However, it has been confirmed that this is not the missing Chinese student.

The unidentified female  appears to have been the victim of a homicide however details of exactly how she was killed are being withheld.

She is described as white, middle-aged (45-50 years of age.)  She has light brown hair and hazel eyes.  Her stats are:

She has a scar on her left wrist and a tattoo that says, “Leo’s Lady.”   She was wearing a silver necklace with white stones and two blue hearts connected together.

She also had bilateral tubal ligation ( ‘tubes tied’ in order to not become pregnant again.)  Police speculate that this woman probably has children somewhere who might be looking for her.